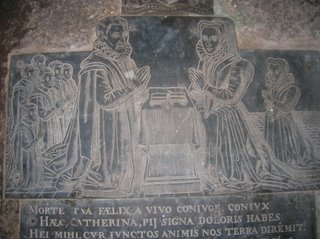 Back to the English landscape today, opting to go to a Church I'd been saving up, that at Ewelme in Oxfordshire (the odd name is Old English 'aewelm', 'place at the river source'). I was mainly thinking about Dame Alice, Chaucer's granddaughter, and Duchess of Suffolk until her death in 1475. I've made a composite picture of her two effigies on her 'transi-tomb': the in-life image of her in her ducal coronet, her pillow being puffed up for her by gilded angels, and, in the lower compartment, her as cadavre, pitilessly shrunken in flesh, only her flowing hair unchanged. In her life image, she is wearing the Order of the Garter round her left forearm, which is apparently what noblewomen and queens admitted to that noble order did - it was presumably far too raunchy a notion for them to wear the garter as just that. Queen Victoria, referred to just this tomb for precedent, wore her order of the garter-garter that way (and probably garters as well).

But the pious efforts of John, Duke of Suffolk (a crony of Richard III) on behalf of his mother seem to have created a critical mass that lifted the quality of other monuments. My other image is of a more bourgeois brass, that to Catherine Palmer, who died in childbed June 26th 1599, aged 34. They had had six sons and one daughter, who are all present in this superb portrait brass. A social historian would say, the classic 7 child reproductive career of the early modern woman, and its concomitant risk. The Latin verses speak for the husband of their always having being of one mind, but now separated. In another brass, the surviving verse reads:
Here lyeth my good amie, the wife of John Froste
Who lyvinge was thanne beloved of moste.
And as here her bodye lyeth close in cheste
So hope I her soule with Christe in much reste.
Obit 13 of June 1585.
Whether she was called 'Amy'. or 'amie' stands for 'friend', I do not know: it was probably a deliberate and rather tender pun.
I was busily transcribing another set of English verses before I spotted in the Latin inscription 'funebre carmen ab Inclyto Edmundo Waller'. Waller did this set of verses in 1658 to commemorate the precocious John Howard, son of Lord Andover; but it was interesting to find them in their designed context:


'Tis fit the English reader should be told,
In our own language, what this tomb does hold.
'Tis not a noble corpse alone does lie
Under this stone, but a whole family.
His parents' pious care, their name, their joy,
And all their hope, lies buried with this boy;
This lovely youth! for whom we all made moan,
That knew his worth, as he had been our own.

Had there been space and years enough allowed,
His courage, wit, and breeding to have showed,
We had not found, in all the numerous roll
Of his famed ancestors, a greater soul;
His early virtues to that ancient stock
Gave as much honour, as from thence he took.

Like buds appearing ere the frosts are passed,
To become man he made such fatal haste,
And to perfection laboured so to climb,
Preventing slow experience and time,
That 'tis no wonder Death our hopes beguiled;
He's seldom old that will not be a child.

Waller notoriously specialised in compliments, but this sounds plausible enough. I like the way in which the kind of adages Richard Duke of Gloucester mutters aside in Act 3 of Richard III ('So wise so young, they say, do never live long' and 'Short summers lightly have a forward spring' - York also reports his Uncle saying that 'Small herbs have grace: great weeds do grow apace') get redeployed for consolatory purposes in Waller's poem, which is secure enough in its tough-minded wisdom to make John Howard sound somewhat to blame for his premature demise.

I walked back to my car along a long lane across a field. Sun-bleached grass, the colour of dry sand, hissed like sand in the wind. Sometimes I feel my loneliness, and mortality. I tried to conjure into sight some archaeology: a hand-axe in the recently ploughed furrows, a bronze torque. Obviously, nothing appeared. I suppose this effort was my obscure way of getting back at recently captivating America, a 'what we lack in scale, we make up for in history' consolation.
Posted by DrRoy at 8:08 pm