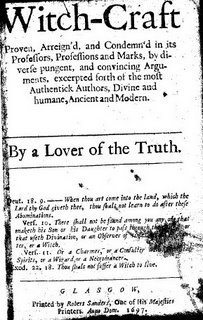 I’ve been reading a minor and belated Scottish demonologist, John Bell, who produced two brief pamphlets, in 1697 and 1700. Opinions may have moved on elsewhere, but sounded the old notes of alarm.

His ‘evident and probable tokens, whereby a Witch, or such as have made express League and Compact with the Devil, may be decerned from all others’ starts conventionally enough. First, look for the insensible devil’s mark. Then, that witches can’t be drowned, either because they are rejected by the element with which they were baptised, or ‘perhaps … for that they be destinat for another Element’. Then, they cannot weep, with the usual Jean Bodin-style proviso that they will ‘distort, throw and wring their faces, making as though they were weeping’. Witches, he next alleges, have a ‘Basilisk, or Serpentine sight’, and they will not repeat ‘the heads of the Christian Religion’, the ten commandments, Lord’s Prayer, or Creed except ‘with several minckings, eikings, or inversions’.

At this point, Bell comes up with a sign that was new to me ‘if you put any great or gross Salt in the Pipe of a Kye (key), and put all into the Fire, upon hearing the crackling, and seeing the blewish low (flame) thereof, which is like that of Brimstone, instantly they shall let go their urine…’

Finally, witches have a ‘peculiar sent or smell … which neither flows from the nestiness of Cloaths, vermine, or the like, but a contradistinct smell from any such thing’. It is in fact the smell of the Devil, who ‘being in full possession of their Soul, must needs emitte his own sent even that of the Pit’.

Perhaps ’s list, in its very preposterousness, served the cause of enlightenment. It is hard to imagine anyone putting into practice his test of a witch being unable to hold her urine if salt is burned, or having much clue of how to identify the smell of the Devil.

In his other pamphlet, The Tryal of Witchcraft (1700) I was interested to see that, among the limited number of texts available to him, was the pamphlet of the ‘Witches of Warboys’, which I posted on a small while back. Bell, even 107 years on from the publication, reads that tract absolutely as the author intended it to be read, unable to see its inadvertent exposure of the three Throckmorton children in all their malignancy and narcissism.