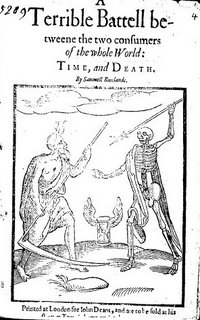 Ah, Saturday night, and here I am reading Samuel Rowlands's 'Terrible Battle between Time and Death' (1606). I got there via a series of ambages (nice word, ambages, apparently one that Francis Bacon was rather drawn to). Considering it is Rowlands, this is quite a sprightly poem, a kind of Terry Pratchett narrative for early modern grown-ups.

Time and Death are characterised as a pair of frightful old codgers, who spend the first part of the narrative talking about the high old times they've had in days gone by, prompting one another with memories of opportune and satisfying fatalities they have caused. These include a love poet, who gets his hyperbole taken literally:

Where went we then, dost thou remember, Time?
Yes, very well, we visited a poet ...

... This Poet thus a-sonneting we found,
Riming himself even almost out of breath,
Cupid (quoth he) ‘thy cruel Dart doth wound,
Oh graunt me love, or else come gentle Death’:

Death. I heard him say, ‘Come gentle Death’ in Jest;
And in good earnest granted his request.

The ghastly pair then start bickering: Time mentions to Death that whenever someone dies, the mourners tend to say, 'His time had come' - why, asks Time, should I get the blame for your killings? Death answers querulously, and they fall into trying to pull rank on one another ('I have bin Death almost six thousand yeares'), and mutual denigration. Death had commented complacently upon his ubiquitous iconography early on in the poem -

Some make my picture a most common thing,
As if I were continual in their thought,
A Deaths head seale vpon a great gold ring,
And round about Memento Mori wrought...

But now Time reminds him of how over-familiar and vulgar his images can be:

Thy picture stands upon the Ale-house wall,
Not in the credit of an ancient story,
But when the old wives guests begin to braule,
She points, and bids them read Memento mori:
Looke, looke (saies she) what fellow standeth there,
As women do, when crying Babes they feare.

They descend into name-calling, but then recollect that the world would laugh if it were known that Time and Death were falling out, and so they make up, and at the end of the poem are about to embark on another killing spree together:
Our bloody businesse let us go about,
Thousands are now at point of death, breath failes:
To worke, to worke, and lay about thee man,
Let's kill as fast, as for our lives we can.
Harke, listen Time, I pray giue eare,
What bell is that a tolling there?