Earthquakes: I blame the fulkers 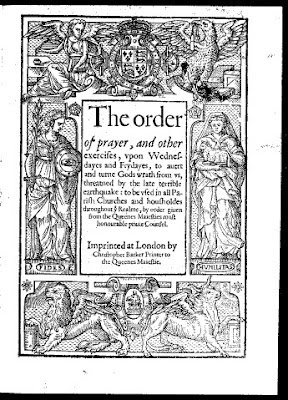 There has been a small earthquake in ,

and this reminded me of Gabriel Harvey’s rather witty account of his experience of the 1580 earthquake, which he wrote about to his friend Edmund Spenser. was playing at cards with two gentlewomen, who were arguing so vehemently about the game that he quipped that their voices have caused an earthquake:

“Where being in the company of certain courteous Gentlemen, and those two Gentlewomen, it was my chance to be well occupied, I warrant you, at Cards, (which I dare say I scarcely handled a whole twelvemonth before) at that very instant, that the Earth under us quaked, and the house shaked above: besides the moving, and rattling of the Table, and forms, where we sat. Whereupon, the two Gentlewomen having continually been wrangling with all the rest, and especially with my self, and even at that same very moment, making a great loud noise, and much ado: Good Lord, quoth I, is it not wonderful strange that the delicate voices of two so proper fine Gentlewomen, should make such a sudden terrible Earthquake?
… But behold, all on the sudden there cometh stumbling into the Parlour, the Gentleman of the house, somewhat strangely affrighted, and in a manner all aghast, and telleth us, as well as his Head and Tongue would give him leave, what a wondrous violent motion, and shaking there was of all things in his Hall.”

At this point, the company decide that it was an earthquake, and not heavy furniture being moved around upstairs. The quarrelsome ladies turn from playing to praying:

“The Gentlewomens’ hearts nothing acquainted with any such Accidents, were marvelously daunted: and they, that immediately before were so eagerly, and greedily praying on us, began now forsooth, very demurely, and devoutly to pray unto God, and the one especially, that was even now in the House top, I beseech you heartily quoth she, let us leave off playing, and fall a praying. By my truly, I was never so scared in myself, Me thinks it marvelous strange. What good Partner? Cannot you pray to your selfe, quoth one of the Gentlemen, but all the House must hear you, and ring Allin to our Ladies Matins? I see women are every way vehement, and affectionate. Your self was liker even now, to make a fray, than to pray: and will you now needs in all hast bee on both your knees?”

Harvey, showing off incorrigibly, now argues that “an Earthquake might as well be supposed a Natural Motion of the Earth, as a preternatural, or supernatural ominous work of God”, taking the not entirely impossible line that the heavy rains in England since Michaelmas have caused the earth to be full like the stomach of a drunk, and it is now (essentially) vomiting. He asks Spenser to send him a copy of the inevitable “threehalfepennie Pamphlet for news” or “Tragicall Ballet in Ryme” about the earthquake, but in his superior vein, wishes “some learned, and well advised University man, would undertake the matter, and bestow some pains in deed upon so famous and material an argument. The general Nature of Earthquakes by definition, and the special diversity of them by division, being perfectly known…”

I took myself off to read one of the “threehalfepennie Pamphlets” about the 1580 earthquake, that by Thomas Churchyard, which amid its pious exhortations, gives the facts, and some vivid detail:
“On Wednesday in the Easter week, being the sixth day of April. 1580. between the hours of five and six in the evening, happened generally through all the City of London, & the Suburbs of the same (as it were in a moment and upon the sudden) a wonderful motion and trembling of the earth, in so much, as Churches, Palaces, Houses, and other buildings did so quiver and shake, that such as were then present in the same were tossed too and fro as they stood, and others, as they sate on seats, driven off from their places: some leaning backwards, were ready to fall: and many besides so shaken standing, that it brought such terror to those that were in the same houses, that the most part feared, their houses would come down upon them, and thereupon ran out of their doors in great perplexity, to see whether their houses were still standing in their wonted place or no. And some houses did so crackle, that the tables and stools, with other furniture, as Brass and Pewter, so tottered, that it was thought they would have fallen to the ground, and the houses rest insunder.”

The quake brought down the top of a pinnacle of Westminster Abbey, bells tolled of their own accord in steeples, it was felt in the great chamber at with the queen in residence there, while the gentlemen of the , dining in their new hall, ran forth with their knives still in their hands, thinking the new building was falling. Tragically, it so shook in Newgate during service there that a boy in the congregation was killed by falling masonry, and others hurt.

For Churchyard, this is all a matter of God's wrath, and he runs through a list of those whose sins draw such correction upon God's people, among which 'fulkers' feature:

"You greedy graceless Fulkers lewd, that lets out gold for gain,
Take heed, lest from the heavens high, hot fire and Brimstone rain."

I had never seen this word before, as you see it means moneylender. A pity it didn't last, but one can see reasons why it wouldn't. (Try "I am a fulker at Lloyds Bank".)

The impious fared rather better than the pious. Plays were being performed at the theatres to the north of the City:

“A number being at the Theatre and the Curtain at Hollywell, beholding the plays, were so shaken, especially those that stood in the highest rooms and standings, that they were not a little dismayed, considering, that they could no way shift for themselves, unless they would, by leaping, hazard their lives or limbs, as some did indeed, leaping from the lowest standings.”

These events were frightening enough to prompt publication of a special order of prayer:

The order of prayer, and other exercises, vpon Wednesdays and Frydayes, to auert and turne Gods wrath from vs, threatned by the late terrible earthquake: to be vsed in all parish churches and housholdes throughout the realme, / by order giuen from the Queenes Maiesties most honourable priuie counsel (1580)

As you see from the title, it recommended fasting two days a week, gave suitable extracts from Isaiah, and the Book of Joel, even a psalm complete with musical notation (xlvi, ‘The Lord is our defence and aid’). The book has ‘A prayer to be used of all householders, with their whole family, every evening before they go to bed, that would please God to turn away his wrath from us, threatened in the last terrible earthquake”. The prayer includes

“We most heartily and humbly beseech thy Fatherly goodness, to look down from thy throne of thy mercy seat upon us most miserable, and sinful slaves of Sathan, which with feareful and trembling hearts doe quake, and shake at the strange & terrible token of thy wrath and indignation appearing most evidently unto us, by thy shaking, and moving of the earth.”

but no special apology for those odious fulkers.