A Slice of Lark Pie 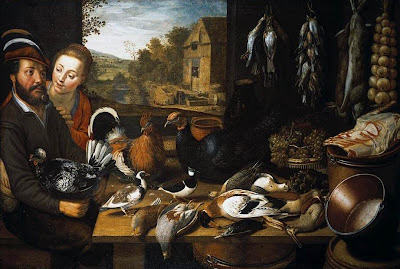 “And, though fowle, now, be scarce, yet there are ,
The skie not falling, think we may have larks …”

Lines from Ben Jonson’s ‘Inviting a Friend to Supper’, that wisely epicurean poem, which I was working through with a group of students. I had the idea that I should look out a recipe for serving lark, and soon found one in Elizabeth Grey, Countess of Kent’s book of potions and recipes, A choice manual (1687):

Take three dozen of Larks, season them with Nutmegs, and half an ounce of Pepper, a quarter of an ounce of mace beaten, then take the Lumber pye-meat [I think she means loin], and fill their bellies, if you will; if not, take half a pound of suet, and one pound of Mutton minced, half a pound of Raisins of the Sun, and six Apples minced all together very small, then season it with a Nutmeg, pepper and salt, and one spoonful of sweet Herbs, and a Lemon peel minced, one penny loaf grated, a quarter of a pint of Cream, two or three spoonfuls of Rose-water, three spoonfuls of Sugar, one or two spoonfuls of Verjuice; then make this in boles, and put it in three bellies, and put your Larks in your Pie, then put your marrow rouled in yolks of Eggs upon the Larks, and large mace, and sliced Lemon, and fresh butter, let it stand in the Oven an hour, when you take it out, make your caudle of Butter, Sugar, and White-wine Vinegar, put it into the Pie.

But Jonson also alludes to an ancient joke, so hoary as to have acquired proverbial force. Here it is (with an added rider) in James Howell’s Paroimiographia Proverbs, or, Old sayed savves & adages in English (or the Saxon toung), Italian, French, and Spanish, whereunto the British for their great antiquity and weight are added (1659)

“If the Sky fall we shall have Larks; But who will catch them?”

I have tried to trace this joke back, and got no further than Rabelais, who alludes to it when leading up to describing the unexpected death of Aeschylus, who, warned by a soothsayer of the danger that day that something would fall on him “stay'd in a large field, trusting himself to the open Sky, there very secure as he thought, unless indeed the Sky should happen to fall, which he held to be impossible. Yet they say that the Larks are much afraid of it, for if it should fall, they must all be taken.”

In English, the allusion crops up in every conceivable kind of context.

“Now these defendours of mere necessitie, whyche they do mysvnderstandynge predestinacion, they handell all these general places of scrypture, as though the speache of God were lyke the common prouerbe, when the skye fall we shall haue larkes. Vnderstandynge all suche condycyons as impossyble.” (Stephen Gardiner, A declaration of suche true articles as George Ioye hath gone about to confute as false, 1546)

2. Political: “But first, this is a mischief so unlike ever to happen, that one need almost as little fear it, as the Skie falling to kill all the Larks.” (Denzil Holles, The case stated concerning the judicature of the House of Peers in the point of appeals, 1675)

3. Geographical (here describing a Jamaican hurricane): “Then fell such an excessive Rain, that as we had one Sea under us, we feard another had been tumbling upon our Heads; for my part, I fear'd the very Falling of the Skie, and thought of nothing but Catching of Larks.” (Edward Ward, A trip to with a true character of the people and island, 1698)

These beside the dozens of allusions in poems, plays and prose works. It’s one of those dead proverbs (how could the English language ever have lost ‘Better a snotty child than his nose wiped off’?). Maybe it could only exist while people were still eating larks, and aware of what a fine consolation for the apocalyptic falling of the sky a profusion of free larks would be.

For Birds Britannica gives the awful toll: 400,000 larks a year went through the Leadenhall Market in early Victorian times, and there were 20 to 40 thousand larks a day arriving in sacks in train trucks for Leadenhall in the 1890’s.

But look back at that recipe. From what I have seen of early cookbooks, the smaller birds were roughly plucked, and their legs cut off: but in went everything. I turned this up from a mid-19th century medical textbook. Overdoing it on the larks was no fun at all (and talking about the intestinal disorders of a ‘lady of title’ produces some weird prose too!):

“Dr Prout told me, that he was sent for to see a lady from whom some odd things had come away. She had suffered excruciating pain: and it turned out to be from larks’ bones. This lady had been in the habit of eating larks, of which some ladies are fond; and she munched the bones. She was a lady of title; but, inconsequence of this lark-eating, she suffered great pain. The substances discharged were sent to a celebrated chemist; - in order that he might ascertain what they were. He first discovered them to be bones; and afterwards, from their figure, they were ascertained to be the bones of larks.” The Principles and Practice of Medicine (1844).