Peeter and the wolf 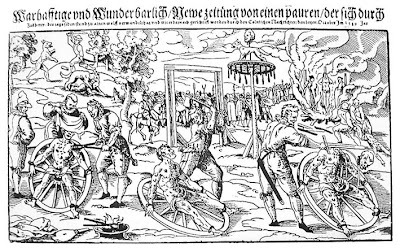 The pamphlet A true discourse. Declaring the damnable life and death of one Stubbe Peeter, a most wicked sorcerer who in the likenes of a woolfe, committed many murders

(1590) is relatively well known, and can be found faithfully transcribed in various places on the darker side of the internet. Stubbe (or Stumpf?) was in all likelihood a mass murderer, though the Wikipedia entry suggests the chance that he was victim of what has to be conceded would have amounted to an energetic smear campaign mounted by the new Catholic authorities, which represented a solid Protestant citizen as a mass-murderer, werewolf, cannibal, as infanticidal, and as a perpetrator of double incest and demoniality.

The full title places his killings near Cologne, and is interestingly informative about the transmission into England of this lurid narrative (and it is apparently only this English version that survives, the German original has been lost):

A true discourse. Declaring the damnable life and death of one Stubbe Peeter, a most wicked sorcerer who in the likenes of a woolfe, committed many murders, continuing this diuelish practise 25. yeeres, killing and deuouring men, woomen, and children. Who for the same fact was taken and executed the 31. of October last past in the towne of Bedbur neer the cittie of Collin in Germany. Trulye translated out of the high Duch, according to the copie printed in Collin, brought ouer into England by George Bores ordinary poste, the xi. daye of this present moneth of Iune 1590. who did both see and heare the same.

Later on in the pamphlet, there’s the same desire to attest to the truth of this incredible and hideous story: a girl who survived one of Stubbe’s last attacks (in werewolf form) was saved by the high stiff collar of the coat she was wearing: “And that this thing is true, Maister Tice Artine a Brewer dwelling at Puddlewharfe, in London, being a man of that Country borne, and one of good reputation and account, is able to justify, who is near Kinsman to this Childe, and hath from thence twice received Letters concerning the same.”

Though I had seen references to the pamphlet, what I hadn’t gathered was that it is such a striking Faustus-variant: Peter Stubbe had sold his soul to the devil, in his case in exchange for the ability to kill with impunity. In his negotiation with the devil:

“this vile wretch neither desired riches nor promotion, nor was his fancy satisfied with any external or outward pleasure, but having a tyrannous hart, and a most cruel bloody mind, he only requested that at his pleasure he might work his malice on men, Women, and children, in the shape of some beast, whereby he might live without dread or danger of life, and unknown to be the executor of any bloody enterprise, which he meant to commit· The Devil who saw him a fit instrument to perform mischief as a wicked fiend pleased with the desire of wrong and destruction, gave unto him a girdle which being put about him, he was straight transformed into the likeness of a greedy devouring Wolf.”

Stubbe, at his arrest, and threatened by torture, was led into a double confession – a combination of the witch’s pact, and having been a werewolf as the benefit of that pact. His coerced story (and whatever was subsequently added to it by the pamphlet’s author) mixes two story types. I have not read Montague Summers’ werewolf book, but I am stuck by the way that in these German stories of such creatures, transformation from human to animal form is not under the influence of the moon, but by use of a diabolic girdle, a ‘wolf-strap’, or belt:

The werewolf has full volition, chooses when to take that shape and kill.

It also interests me that in this pamphlet of 1590, two years before the English Faust book, and four years before Roma Gill’s suggested first performance of Marlowe’s Dr Faustus, what seems to be Marlovian language is being used. In the following extracts I highlight the ‘surfeit’ of sin, the ‘heavenly Helen’ who becomes his concubine – and it is also very striking that this sexual companion is so definitively explained as a ‘she devil’.

“Stubbe Peeter, who from his youth was greatly inclined to evil, and the practising of wicked Arts even from twelve years of age till twenty, and so forwards till his dying day, insomuch that surfeiting in the Damnable desire of magic, negromancy, and sorcery, acquainting him self with many infernal spirits and fiends, insomuch that forgetting ye God that made him, and that Saviour that shed his blood for mans redemption: In the end, careless of salvation gave both soul and body to the devil for ever, for small carnal pleasure in this life, that he might be famous and spoken of on earth, though he lost heaven thereby…

… he so won the woman by his faire and flattering speech, and so much prevailed, yt ere he departed the house: he lay by her, and ever after had her company at his command, this woman had to name Katherine Trompin, a woman of tall and comely stature of exceeding good favour and one that was well esteemed among her neighbours. But his lewd and inordinate lust being not satisfied with the company of many Concubines, nor his wicked fancy contented with the beauty of any woman, at length the devil sent unto him a wicked spirit in the similitude and likeness of a woman, so faire of face and comely of personage, that she resembled rather some heavenly Hellin then any mortal creature, so far her beauty exceeded the cheifest sort of women, and with her as with his harts delight, he kept company the space of seven years, though in the end she proved and was found indeed no other then a she Devil.”

This unequivocally diabolic bedfellow, that resembles ‘some heavenly Helen’, perhaps shows how the Faustus story began to gravitate quickly towards the demonological witch paradigm. In the Faust book, Helen is a spirit conjured up by Faustus “which near had inflamed the hearts of the students, but that they persuaded themselves she was a Spirit, wherefore such fantasies passed away lightly with them” (Chapter 45). The author’s moralizing comment then points towards the concealed nature of this simulacrum: “Wherefore a man may see that the Divel blindeth and enflameth the heart with lust oftentimes, that men fall in love with Harlots, nay even with Furies, which afterward cannot lightly be removed”, but even in Chapter 55, where Faustus brings her back in the 23rd year of his pact, she is still not explicitly a devil. In this Faustus variant, Stubbe has to have committed demoniality like a witch, and in describing the beauty of the wicked spirit the devil sends him, the author thinks back to what was a latent meaning in the Faust book – and, perhaps, though the resemblances are not extensive or exceptionally idiosyncratic, recalls a portion of the play Christopher Marlowe was just maybe then writing piecemeal and showing around.

The pamphlet is completely vague about just how Stubbe’s third female companion was “proved and was found indeed no other then a she Devil”. I suppose that if it came up in his trial, it would have been a proof based on confession under threat. Supernatural things can be assumed to disappear readily enough: Stubbe’s girdle that allowed him to transform to animal shape (itself so like the magical bridle in The Late Lancashire Witches) is something he can’t show (or demonstrate!) in court, and that does get explained away: “which Girdle at his apprehension he confessed he cast it off in a certain Valley and there left it, which when the Magistrates heard, they sent to the Valley for it, but at their coming found nothing at all, for it may be supposed that it was gone to the devil from whence it came, so that it was not to be found. For the Devil having brought the wretch to al the shame he could, left him to endure the torments which his deeds deserved.”

My image comes from the Wikipedia, where members of the ‘Serial Killer Task Force’ are in dispute about this precise entry:

It shows the horrible mutilation, breaking on the wheel and beheading of Stubbe, his last attack (on the little girl in the high-collared coat), along with his daughter (partner in his alleged incest) and human mistress being burned alive. There is also a view of the special totem put up, with Stubbe’s head, his werewolf shape, the wheel on which he was broken, and sixteen pieces of wood dangling from in commemoration of his known victims.

where would one get such a girdle? was his girdle found and destroyed? or was it just "hidden"

Well, as my post retells it from the pamphlet, Stubbe gets his directly from Satan, and it cannot be found after he has discarded it and been captured, though an effort is made. I guess similar assumptions would lie behind the other tales of such girdles, that they come direct from the devil via witchcraft, and disappear rather than hang around as hard evidence.