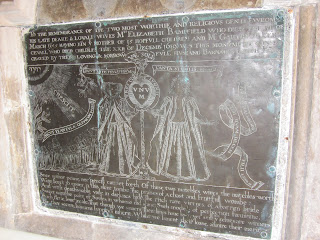 Life’s a bit too busy to trawl up oddities from the depths of EEBO, so another post about a Jacobean monument, one that I found remarkable. It’s a brass plaque in Shorwell church, on the Isle of Wight. It (just maybe) conveys a double message – alongside the quite sincere tribute-in-general, may be some hints of a more complicated story.

Top and bottom of the plaque are these two texts, which tell the facts:

“To the remembrance of the two most worthie and religious gentleweomen his late deare & loyall wives Mrs Elizabeth Bampfield who died the VIIth of March 1615 having bin ye mother of 15 hopefull children and Mrs Gartrude Percevall who died childless the XXII of December 1619 was this monument consecrated by their loving & sorrowfull Husband Barnabas Leigh Esq.”

I have re-lineated the lines at the bottom:

Since neither penne, nor pencill can set forth
Of these two matchles wives the matchles worth
W’are forc’t to cover in this silent tombe
The Praises of a chast and fruitfull wombe:
And with death’s sable vaile in darknes hide,
The ritch rare virtues of a barren bride.
Sweet saintlight paire of Soules, in whome did shine
Such models of perfection fæminine,
Such Pietie, love, zeale: That though we sinners
Their lives have lost, yet still [them]selves are winners
For they secure, heavens happiness inherit,
Whilst we lament their losse, admire their merit. 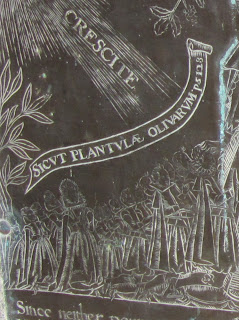 In between the two main texts, the pictorial part of the plaque shows the two women, Elizabeth with her shoal of fifteen behind her, kneeling in primary and secondary ranks by gender, the ten boys first, the girls behind. Her hand touches the bared head of the eldest son. From the normal post-Reformation ‘depiction’ of God, ‘Jehovah’ in Hebrew letters, the divine command ‘Crescite’(‘Increase’) shines down on the male children. Gartrude is of course on her own, but the 'Chi Rho' symbol for Christ shines down on her. 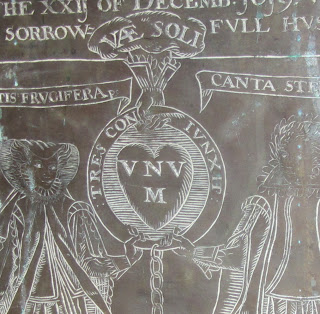 Between the two women, a male gloved hand breaks the word ‘Sorrow=full’ in the memorial inscription, and is itself inscribed ‘vae soli’ – ‘woe alone’. The hand supports, with the left hand of Elizabeth and Gartrude’s right hand, a ring, with the motto ‘tres conjunxit’ (‘three joined, coupled’) around a heart, the heart with the motto ‘Unum’ – ‘one’. A chain descends from the ring to a death’s death (‘divisit’ – ‘it divided’), but, in a nice detail, both women have a foot, rather jauntily, on the death’s head, as a modest expression of their triumphant ascent to eternal life. 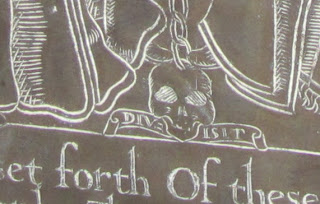 As is quite normal in portraits of the time, text is just about as important as depiction, and we have plenty more to read. Barnabas Leigh had searched his Bible for texts suitable to honour both his wives. Divine light shines on Elizabeth, and she gets “Sicut Plantulae Olivarum ps128” as one of her mottoes (on the scroll to her left), and above her head, “sicut vitis frugifera”. Both are from Psalm 128, verse 3: “Thy wife shall be as a fruitful vine by the sides of thine house: thy children like olive plants round about thy table.”

1 Sing, O barren, thou that didst not bear; break forth into singing, and cry aloud, thou that didst not travail with child: for more are the children of the desolate than the children of the married wife, saith the Lord.
2 Enlarge the place of thy tent, and let them stretch forth the curtains of thine habitations: spare not, lengthen thy cords, and strengthen thy stakes;
3 For thou shalt break forth on the right hand and on the left; and thy seed shall inherit the Gentiles, and make the desolate cities to be inhabited.
4 Fear not; for thou shalt not be ashamed: neither be thou confounded; for thou shalt not be put to shame: for thou shalt forget the shame of thy youth, and shalt not remember the reproach of thy widowhood any more.
5 For thy Maker is thine husband; the Lord of hosts is his name; and thy Redeemer the Holy One of Israel; The God of the whole earth shall he be called.
6 For the Lord hath called thee as a woman forsaken and grieved in spirit, and a wife of youth, when thou wast refused, saith thy God.
7 For a small moment have I forsaken thee; but with great mercies will I gather thee.

The other text for Gartrude is more interesting – but really sets a challenge about where to stop an interpretation. One notices that she is depicted pointing to the text with her free hand, in a balancing gesture to Elizabeth’s hand blessing her eldest son. Gartrude’s text is “An non ego melior tibi quam decem filii 1 Sam 18”. 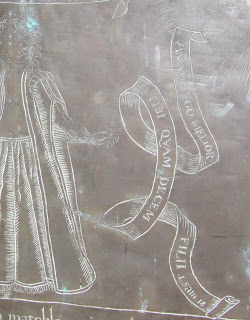 This takes us to the start of the First Book of Samuel – the text is the last part of this extract:
1 [Elkanah] had two wives; the name of the one was Hannah, and the name of the other Peninnah: and Peninnah had children, but Hannah had no children …
… 4 And when the time was that Elkanah offered, he gave to Peninnah his wife, and to all her sons and her daughters, portions:
5 But unto Hannah he gave a worthy portion; for he loved Hannah: but the Lord had shut up her womb.
6 And her adversary also provoked her sore, for to make her fret, because the Lord had shut up her womb.
7 And as he did so year by year, when she went up to the house of the Lord, so she provoked her; therefore she wept, and did not eat.
8 Then said Elkanah her husband to her, Hannah, why weepest thou? and why eatest thou not? and why is thy heart grieved? am not I better to thee than ten sons?”
The Bible story is one of an awful rivalry over fertility between two wives: Peninnah/Elizabeth producing children, Hannah/Gartrude weeping, and not eating, always under the lash of her rival’s provoking tongue.
Obviously, Barnabas Leigh did not, like Elkanah, have two wives at once. He had found the perfect text for Gartrude in the splendid promises made by the Lord himself in Psalm 54. A further text was gratuitous: he could have quoted twice from the one Psalm, as was done with Elizabeth. Was it the intention to indicate that Elizabeth’s success in multiple births (and how eloquent of the uncertainties of child survival at the time is that regular locution about “hopefull children”) oppressed Gartrude as second wife? Out of a Bible context rich in implications (if implications were meant), chosen for the plaque was that strong affirmation of a husband’s love “An non ego melior tibi quam decem filii” – ‘am not I better to thee than ten sons?’ 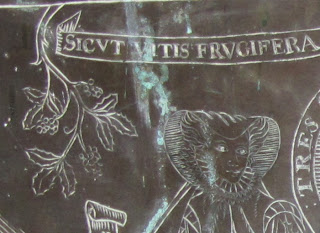 Look at how the artist depicted the ‘fruitful vine’ to the left of Elizabeth’s head: it’s actually a sprig of holly. I know holly has Christian meanings, but I do wonder at the substitution of spiky holly leaves for vine leaves.
In the Book of Samuel, poor oppressed Hannah prays in the Temple – Eli the priest thinks she is drunk, for her prayers are spoken in her heart – her mouth moves, but she makes no sound. Her silence in prayer contrasts her to the sharp-tongued Peninnah. The reward for her faith is the longed-for pregnancy – she will be the mother of Samuel, whom she dedicates to the Lord who lent him.

Of course, any woman who has endured fifteen (and possibly more) pregnancies is entitled to have a sharp tongue and (within the general parameters of an undeniable success at “perfection fæeminine” in regards to that divine command “crescite”) be rather a challenge to her husband.

I have most likely over-read this monument – but it went out of its way to invite reading, didn’t it? 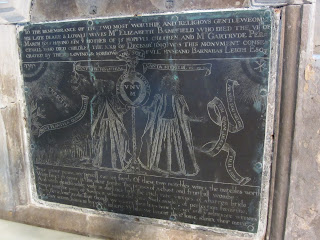 A thoughtful reading of a subject worthy of deeper interpretation ... !