At the Eroica Britannia again

This has to have been be one of the most enjoyable days I've experienced in all my years of cycling. There can't be many days in Derbyshire where it's warm for a start at 7.15am. The weather was unbelievable, with the Peak District doing a brilliant impression of Tuscany.

I was back at the Festival ground by (any bike rider will snort) 2.15pm.

55 miles ... in seven hours? What can I say? I was making a day of it. The route is (cue singing nuns) Climb every Mountain, and a largish proportion of the ride is on trackways. The dozens of people fixing punctures just makes you think that you must ride slowly, picking an optimum line, for if you charge along, you are bound to puncture.

Nor can you fly down the hills if your life depends on Weinmann centre-pull brakes. No problems with my famous Harry Hall, and its tubular tyres just might be a good idea when 'snakebite' punctures are so easily had.

So, instead of wondering what kept me, I give myself maximum marks for correct pacing. My plan for the ride was to spin along on a small gear while possible, saving my beans for the climbs, and then ride every damn one of them without getting into real difficulties. Concentrate on enjoying the day, drink the free beer at the lunch stop, and, these things put together, not ending up wilted in a patch of shade under a tree, or foaming with sweat at the stops, being treated for cramp, or being cajoled along by quite anxious riding partners. There was quite a bit of that. In quite testing conditions, I cruised round. Slowly!

I suppose all those years of club riding gives you a realistic perspective - gradually - on what is the best option. Ignore the clock, and I bossed this ride.

I was also stopping to take photographs. After the mid-point of the ride, the camera was so warm that some internal fogging blurred the lower right of the photographs. A selection follows, but first a professional shot of me crossing the Monsal Dale viaduct. Behind me, in the cool deep cutting just at the mouth of the tunnel, a glee club were singing 'Daisy, Daisy'. The brilliantly organised lunch stop was a couple of level miles ahead. 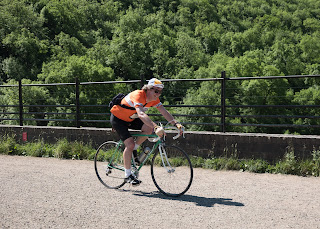 The Eroica is the only mass participation ride I do. I treat it in a solipsistic fashion: the majority are far more involved in the whole event and its festival, ride in costumes (tweeds and wool socks remained popular), and with friends.

From Audax riding days, I'd tended to assume that the middle distance would be the most popular option, but in this year's tweak to the route, the middle length and short rides joined for the last couple of miles. Suddenly there was a barely-cycling army of stropping pre-teens, boys with limited bike-handling skills, and their hot and bothered parents. One concludes that, really, the short ride is the difficult one.

At the finish, I heard after a bit the name of Professor Steve Pudney announced. He's a man I've met, and whose Lands End to John O'Groats ride for charity on a bicycle precisely as old as himself I followed via his blog. He'd had his first experience as a  rider of proper cycling-induced cramp, of the yelping in pain lying on the roadside kind. I suggested to him that a free gin and tonic, or at least the tonic part, might help. The young woman helping work the Hendricks Gin promotion must have been a resting actress perfecting her saucy barmaid persona, and launched into a repertoire of risque cucumber quips. I quite enjoyed watching the role reversal. Hot, bothered but very correct male trying to cope with a barrage of not totally welcome banter from a young woman. But he avoided triggering intellectual cramps and came through this unexpected ordeal as he had the physical one.

I follow your blog because I'm a fellow early modern historian with an interest in religion and witchcraft, but I'm also delighted to find out you're a cyclist. Sounds like a fun event! Here in western Massachusetts we have a similar event, the Deerfield Dirt Road Randonnée, every August, with routes from a 20-mile family event to 200K, mostly on unpaved roads with grades that recall the Peak District. I usually ride 100-115 km and don't push too hard either; the point is to enjoy the day, not to exhaust myself. I'll have to check out the Eroica Britannia the next time I'm in the UK in June. I quite enjoyed riding from the Derby railway station to Matlock and Hassop when I had a conference at Hassop Hall in 2012, and then back to the Chesterfield station via Chatsworth Park (at the time I was living in Paris).

Nice to meet you (as it were), Brian. I've just been checking out your many travels on your Flickr site - you do get around. Curious for a relative local like me to see Matlock mixed in with America, Iceland, and France.
Handsome bike you are riding, exactly suitable to any of the Eroica events (I think they are now world-wide), for they do allow traditional builds alongside pre-1987 bikes. Cycling has been at once a great thing and detrimental in my life - detrimental because I have often been thinking about my next ride when I should have been thinking of something professionally academic.
My Harry Hall bicycle's most distinguished feature is its bell: I possess the early modern scholar-bicyclist's ultimate bike bell. Resonant in the proper alloy for a big noise and a long fade, and engraved with "It tolls for thee" - what else?
best wishes,
Roy