The Shakespearean or early modern pumpkin 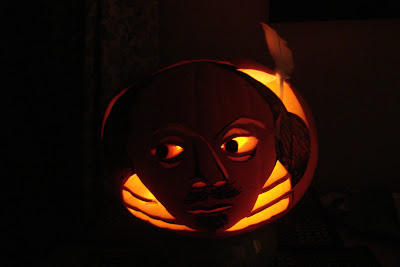 Clown. …for mine own part, I am (as they say, but to perfect one man in one poor man) Pompion the great sir.

Berowne. Art thou one of the Worthies?

Or, of course, for rotundity:

For all kinds of jokes:

“The Welsh-man purchased the Pompion for the Mare’s Egg and got never a Colt from it” (Richard Boulton, Richard, A letter to Dr. Charles Goodall (1699)

The Reason is, because the Pompion abounds with strong Spirits, and a sowrish Juice: Now it is manifest that all sowr things are endued with a resolving virtue, which daily experience shews us concerning Vinegar. And PLINY assures the same concerning sharp pointed Docks, viz. that being boyld with Flesh, it makes it more soft and tender; because its sharp and corroding quality doth dissolve the Texture of the Fibres.”

~ A worthwhile tip, and from no less a source than An entire body of philosophy according to the principles of the famous Renate Des Cartes in three books, 1694.

And of course for carving. Assembling this little collection took me to The Essex champion, or, The famous history of Sir Billy of Billerecay and his Squire Ricardo (1699), which is a piece of sub-Quixote buffoonery by William Winstanley. Sir Billy having taken to delusions of knight-errantry and picaresque chivalry, an Innkeeper induces a groom to try to frighten their credulous guest. The groom dresses in a bear’s skin, and carries “on his shoulder a lighted Candle in the Rinde of a Pompion, cut out with the resemblance of Nose, Eyes, and Mouth, it looked most dreadfully.” But Billerecay Billy summons his resolution, and smites him hard enough to split the pumpkin and extinguish the candle. The groom thinks the cracking noise was his own skull, and flees, leaving Billy convinced that he has vanquished the devil.

Or the OED gave me W Kenrick, Falstaff's Wedding (1760): “Hast thou never seen a pumpion, fantastically carv'd and set over a candle's-end, on a gate-post, to frighten ale-wives from gossiping by owl-light?” But that's out of my period. That's my pumpkin for tomorrow, the gourd of Avon.

I have been looking at the case of the printer John Allen, author of Judicial astrologers totally routed, and their pretence to Scripture, reason & experience briefly, yet clearly and fully answered, or, A brief discourse, wherein is clearly manifested that divining by the stars hath no solid foundation ... published by J.A. for publick good, Printed for John Allen (1659).
This is very typical anti-astrological writing: haggling over the Bible texts they always cited for and against astrology (like Jeremiah 10, 2), busily explaining away Daniel in the Book of Daniel as something completely different from the Chaldeans also consulted by Nebuchadnezzar.
Allen, a man rooted in the book trade, knowledgably deplores William Lilly’s massive sales: that his almanacs sold 30,000 copies a year, and Allen imagines the problem likely to be caused if all these diabolically deluded readers of astrology, morally awakened, burned all these almanacs. He does indeed appear generally interested in book burning: he cites approvingly Acts 19, 19 “Many of them also which used curious arts brought their books together, and burned them before all men”. Nor is he very far off from recommending the burning of astrologers, but he settles, as the witch-hunters sometimes reluctantly did, for hanging, after the provisions of the 1604 statute against witchcraft.
Like many of these denunciations of astrology, Allen’s work is particularly interested in the converts, those who did practice the art, and then recanted of it: ‘holy Master [William] Perkins’, and the much cited case of Henry Briggs, ‘Geometry-reader at Oxford’ (the Savile professor of Mathematics, who produced tables of logarithms):
“… Mr. Briggs left that study. Yea, he affirmed that he would undertake to the skilfullest Astrologer in the world, that let him set down any conclusion touching either man or State, yea, or weather, and he would prove that it would fall out so, and that it would not fall out so, from their own Rules and Principles: He said also that his opinion was, that they that addicted themselves to the practise of divining Astrology, the Devil did at first lend his secret assistance, and at length by degrees, if God prevented not, entice them into a contract.”
The first part of this does sound quite plausibly what a professor of mathematics might have said: that astrology has just too many variables. But when Allen claims that the Savile Professor of Mathematics came to believe the study of astrology led on to a diabolic pact, we might suspect some editorializing, in line with his own approval of drastic measures.
What’s behind all this becomes apparent in the second edition of the work, as put out by Allen ‘for publick good’. I imagine he might have been giving copies away, and hence the rapid second printing of an unremarkable book, which he’d have had done in house, ‘The Rising Sun in Paul’s Churchyard’. For we arrive at confession time:
“The former Part of this Book finding a general acceptation with the Judicious, (and Gods wonderful deliverance of me from so great a snare, when I was for many years a Student in this abominable practice of Judicial Astrology)…”
For this is the same John Allen who had published John Gadbury’s Coelestis Legatus: OR, The Coelestial Ambassadour Astrologically Predicting the Grand catastrophe that is probable to befall most of the Kingdoms and Countries of Europe in 1656, Magia Adamica (in the same year), and Astrology proved Harmless, useful, Pious – the wildly unstable Richard’s Carpenter’s sermon to the Society of Astrologers,  1657. 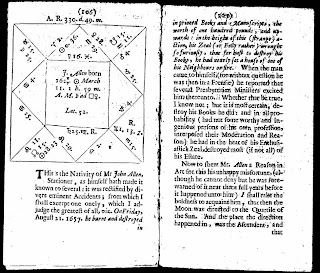 What happened to John Allen is amusingly told in a pro-astrological pamphlet of 1660, A brief answer to six syllogistical arguments brought by Mr. Clark, minister of Bennet-Finck, London: against astrologers, and astrologie, London : Printed for Samuel Speed, at the sign of the Printing-Press in Pauls Church-yard, 1660.
“This is the nativity of Mr John Allen, Stationer, as himself hath made it known to several: it was rectified by diverse eminent Accidents; from which I shall excerpt one onely, which I adjudge the greatest of all, viz. On Friday, August 21. 1657. he burnt and destroyed in printed books and Manuscripts, the worth of one hundred pounds, and upwards: in the height of this (strange) action, his Zeal (or Folly rather) wrought so furiously, that for haste to destroy his Books, he had nearly set a house of one of his Neighbours on fire. When the man came to himself, (for without question, he was then in a Frensie) he reported that several Presbyterian Ministers excited him thereunto. Whether that be true, I know not; but it is most certain, destroy his books he did: and in all probability (had not worthy and ingenious persons of his own profession, interposed their Moderation and reason) he had in the heat of his Enthusiastick Zeal, destroyed most (if not all) of his Estate."
The writer obviously knew Allen in the days before his dramatic conversion, and smugly points out that astrologers had foretold something like this happening. Nor does he miss the readily made joke about the Moon being in the ascendant when Allen performed his lunatic act:
“Now to shew Mr Allen a reason in Art for this his unhappy misfortune, (although he cannot deny but he was forewarned of it near three full years before it happened unto him) I shall take the boldness to acquaint him, that then the moon was directed to the Quartile of the Sun, and the place the direction happened in, was the ascendant…”
£100 worth of books was certainly a big bonfire: four thousand books if they were at the usual sixpence, though almanacs seem to have gone for half that. It was a big step for a stationer to make, and a decisive shift out of a market whose lucrative nature Allen knew well.
Posted by DrRoy at 5:21 pm No comments: Links to this post 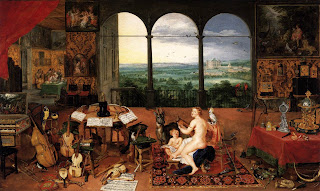 My main image is the sumptuous allegory of hearing by Jan Breughel the Elder, working in the studio of Rubens in 1618.

Posted by DrRoy at 6:11 pm No comments: Links to this post