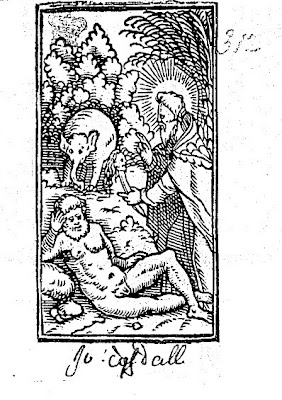 Not much time in my weekly routine for blogging these days, now that teaching term has started. But I found this woodcut on EEBO, which says only this about it: “Illustration of the creation of Eve from Adam’s rib Date: 1600-1699. Reel position: Tract Supplement E3:1[183]”.

I found it a quite remarkable version of the creation of Eve. It isn’t the usual unnatural obstetrics, where a full sized Eve rises upright from Adam’s side. God has extracted the rib, and is at work upon it, blessing it. Eve’s head has already taken shape, but has yet to fill out to full size, so it looks like a shrunken head, the rest of her is still rib. It’s a disconcerting image: even the elephant seems to be looking uneasy at these strange goings-on. No wonder this version of the moment is not the usual iconographic type.

But I have possibly found a passage in Sylvester’s du Bartas that it just might have been cut to illustrate. Below is the creation of Eve as given in the sixth day of creation. That du Bartas says that God works with Adam under anesthetic, like a surgeon performing an amputation, is the first surprise. One tended to think that they just sawed away with the poor patient strapped or held down. But then again, they did know about opiates – and strong liquor. Once the rib has been extracted, God refines and carves ‘on the living bone’:

Even as a Surgeon, minding off-to-cut
Some cure-less limb; before in ure he put
His violent Engins on the vicious member,
Bringeth his Patient in a sense-less slumber,
And grief-less then (guided by use and Art)
To save the whole, sawes off th' infected part:
So, God empal'd our Grandsires lively look,
Through all his bones a deadly chilness strook,
Seal'd-up his sparkling Eyes with Iron bands,
Led down his feet (almost) to Lethè Sands;
In brief, so numb'd his Soul's and Body's sense,
That (without pain) opening his side; from thence
He took a rib, which rarely he refin'd,
And thereof made the Mother of Mankinde:
Graving so lively on the living Bone
All Adams beauties; that, but hardly, one
Could have the Lover from his Love descry'd,
Or known the Bridegroom from his gentle Bride:
Saving that she had a more smiling Eye,
A smoother Chin, a Cheek of purer Dye

A fainter voice, a more enticing Face,
A Deeper Tress, a more delighting Grace,
And in her bosom (more then Lillie-white)
Two swelling Mounts of Ivory, panting light.

Du Bartas’ narration of life in Eden is obsessed with Adam, whose small activities the narrative follows around. Adam even seems to sleep alone (though the narrative may at that point have drifted back imaginatively to the time before Eve’s creation). Here, all Eve’s beauty is secondary to Adam’s, which primary male beauty God merely reproduces in softer form as he carves.

Continuing with Eve, I was looking with my students at the moment when Eve’s pregnancy is announced. Adam has just mastered fire: he was trying to bring down an animal by throwing:

A knobbie flint that hummeth as it goes;
Hence flies the beast, th' ill-aimed flint-shaft grounding
Against the Rock, and on it oft rebounding,
Shivers to cinders, whence there issued
Small sparks of fire no sooner born then dead.

Adam instantly knows what he has:

This happy chance made Adam leap for glee,
And quickly calling his cold company…

His ‘cold company’ is of course Eve, and it falls to her to tend the spark to a flame. The narrative then passes swiftly to the birth of her first offspring:

Eve, kneeling down, with hand her head sustaining,
And on the low ground with her elbow leaning,
Blows with her mouth: and with her gentle blowing
Stirs up the heat, that from the dry leaves glowing,
Kindles the Reed, and then that hollow kix
First fires the small, and they the greater sticks.

[Note: Beginning of Families. ]
And now, Mankind with fruitful Race began
A little corner of the World to man:
First Cain is born, to tillage all addicted …

It’s a very telling transition: Adam supplies the spark; she tends the fire. Adam has supplied the seed (imagined then as being, in small, the complete child-to-be, which Eve’s role is merely to nurture).

Interesting work, du Bartas, and at least I may be the first person to try teaching extracts from it to undergraduates – this is in my ‘Paradise in Early Modern Literature’ course …

Posted by DrRoy at 1:48 pm 2 comments: Links to this post