‘Their eyes were holden that they should not know him': J H Glaser's anamorphic Fall, 1638

This is Johann Heinrich Glaser’s anamorphic composition, ‘The Fall’, 1638, dedicated to the Rector of Basle University, a man called Remi Fasch.

I sourced the image in Jurgis Baltrušaitis’ Anamorphic Art (1977), following up a reference in Stuart Clark’s 2007 book, Vanities of the Eye. I post this because I tried to find the image somewhere on the web, but failed apart from a couple of impossibly small-sized reproductions in Google books. (I haven’t been able to source a copy of Fred Leeman’s Hidden Images book of 1976, which may have a better version.)

So, this is two scans merged together of one A3 sized photocopy of a double page reproduction in a book. I then fastened my long strip to a piece of plywood with blu-tack, and tried taking oblique photographs from the principal point of view you must use if the anamorphic face of Christ crowned with thorns is to appear. 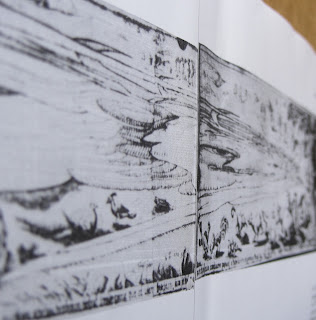 Well, much has been lost in this series of reproductions. I did my best; it conveys the idea. There’s no angle that gives a better view of the image of Christ, without those alarmingly dissimilar sized eyes that is. Baltrušaitis does not give the original dimensions of the 1638 print. Judging by the size of the letters in the dedicatory inscription that runs along the bottom, I’d guess at twice the size of the reproduction, which is 40cm across in the book. The real thing must work far better than the reproduced version. Clarity in this case is everything, if the eye is to be deceived.

So, within these limitations, I think we can see, reading across from the right, Adam and Eve at the forbidden tree, with a large and properly serpentine (rather than Lamia-like) serpent coiled round the tree trunk, while an owl sits on a branch, and a peacock stands at their feet. Between them, Death rises up as they disobey God.

The animals: an ape gazes at the lake, but it is viewing the ‘vexierbild’, the puzzle-picture from the wrong side: the ape will not see Christ (as if the picture demonstrates that it lacks a soul). On this side of the lake, and nearest the act of transgression, foxes, a bear, a cow, rabbit, a cat and a dog sparring. Behind these animals, a half-hidden row of birds: what might be a toucan (known from the mid 16th century), two ibises, a cockerel with two rather exotic hens, a bird with a crest, a pheasant, a turkey, and a sprawling alligator. Then at the far left, the angel or cherubim chases Adam and Eve out of Paradise, the serpent wriggles at their feet, ready to start receiving its curse, and Death encourages their flight from Eden into his realm. 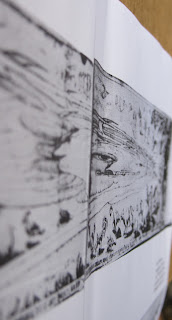 The lobe-like shores of the lake are of course where the anamorphic, hidden Christ begins. As a lake in Eden, He enlarges the usual four source streams of Paradise, usually depicted as clear rivulets stemming from a fountain, and usually allegorised as God’s grace flowing out to the whole world (the Pison, Gihon, Hiddekel and Euphrates, as Scafi’s book on Medieval maps explains, being taken to water all countries). Man’s sin has the reservoir of grace ready, the redeemer will not be revealed for millennia, but His mission, for which He is ready, has started.

Glaser has found a new way to put the two Adams into one picture (“First, wee see the difference between the two Adams: the first made sin, and infected all the world with it: The other made no sin, but redeemed all the world from it”, wrote Nicholas Byfield in 1623, it was a favourite thought of Donne’s – and of course many others).

There must be a larger study of unrevealed or half-revealed Christs. That Christ’s divine nature was hidden during His incarnation is one regular idea. But Christ is repeatedly not seen, or unrecognized. My title for this post comes from Luke 24, verse 16, non-recognition on the road to Emmaus; Mary Magdalene does not know him at John 20 14-16. At the start of His mission, in Like 4, 28-30, in one verse, Jesus is about to be cast down from the top of the hill by those angered by His calm self-announcement (after He has read from Isaiah in the synagogue, ‘This day is this scripture fulfilled in your ears’), and His apparent refusal to show His ministry in Nazareth: the next verse, He has somehow slipped away through the angry mob: Jesus autem transiens in medio illorum, the line medieval travellers liked to have on their good luck charms.

There ought, really, to be more early modern pictures like this. The Reformation’s iconoclasm made depictions of the godhead controversial. This was a perfect way to compromise (you’d have thought): Puritans, all you see is a landscape, Anglicans, squint in from the left frame. But I guess they were so much one or the other, compromise never appealed that much. 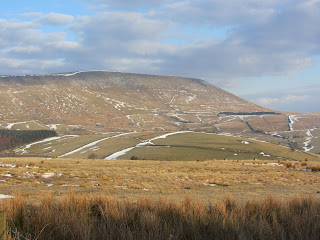 After talking about The Late Lancashire Witches for years, I finally got up to Pendle Forest to try to get a sense of the area. It had been my odd hope to be there when some of the famed 'mist over Pendle' was rolling by, as I fancied seeing a 'Brocken Spectre' on the Mountain:

http://en.wikipedia.org/wiki/Brocken_spectre
as some people have been lucky enough to do:


Pendle Hill, like the Brocken (or Blocksberg) has a microclimate that causes strange sightings, and then (it seems to me) follow rumours of the supernatural. Witches (‘trulli’) are associated with mountains at Kyöpelinvuori, Finland; at the Brocken or Blocksberg; and at Pendle. George Fox had the vision up on this mountain that led him to found the Quaker movement. It's evidently a place that generates visions. 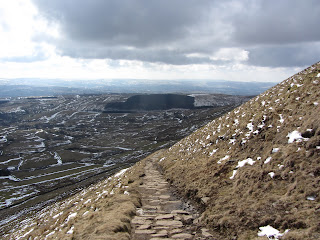 Instead, I got the coldest of Easter weekends, which at least meant that I didn't miss the views: 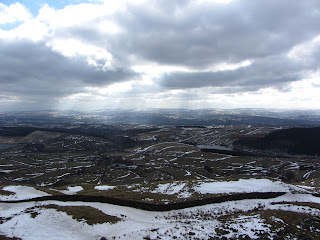 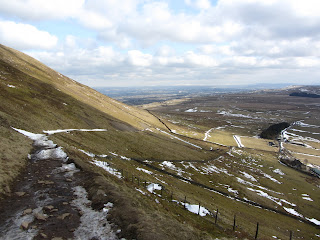 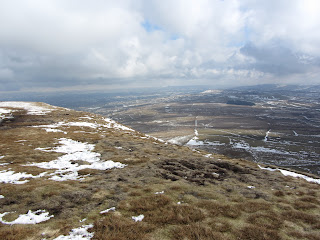 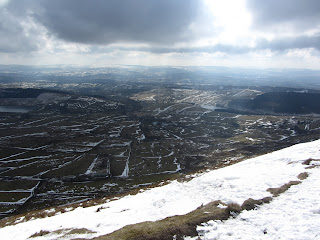 It is a mountain of considerable presence. I had seen photographs, of course, but they don't give you the sound - the cry of the curlew adds immensely to the atmosphere of slight weirdness. To get to a fuller extent the effect, this sound file could be played while looking at photographs: that other-worldly rising keen:
http://sounds.bl.uk/Environment/British-wildlife-recordings/022M-W1CDR0001375-0600V0


Of course, all this 'Bare Mountain' stuff is romantic and added in after the event: 'Old Demdike' and 'Old Chattox' and the rest met Satan on familiar lowland paths and in fields way below the mountain. Their concerns, and broodings, concerned resentments in daily life.


I was struck by how often the familiar names from the 1612 and 1633-4 witch cases appear in the area. Churchyards are well stocked with members of the Hargreaves dynasty, the Nutter clan, Southworths, Ashtons and Starkies abound (thinking of other local cases and instances of possession). If your family lived there, your family stayed there, the consistent appearance of local names indicates an isolated population.


It's a beautiful landscape, with just a touch of Mordor about it.