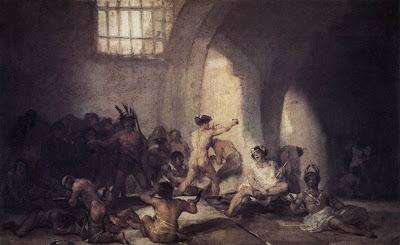 ‘To a Lady, who was very kind to him in the place.’

Madam, when first your Beauty shin’d
Into my Cell, on me confin’d,
I grew in Love with my dark Cloister;
Slighted (poor and hungry) Pearl and Oyster:
The Apricots which you me threw,
The thoughts of Paradise renew;
In Eden’s Garden sure they grew,
Transplanted to Moorfields by you.
You gave me Silver; whence I hold,
I ought not to Envy Danae’s Gold;
For though on her Jove rain’d a Shower,
'Twa’nt real, but Poetic Ore.
You me with Paper, Pen, and Ink,
Madam, suppli’d, as well as Chink;
This my Muse studies to requite
In part, to you when she does Write.

Your Charity sent me a Shirt, each thread
Whereof, to you me fast does Wed;
And thus from your extended hand,
The Shirt in mine, turns to a Band.
At Night in Straw, Lying a-long,
To th’Oaten Pipes this was my Song.

A search on EEBO for early works on, about, or treating of madness (prompted by the mad-house in The Changeling) led me to James Carkesse’s Lucida intervalla, containing divers miscellaneous poems, written at Finsbury and Bethlem by the Doctors patient extraordinary (1679). Carkesse, who brought all his troubles upon himself, was incarcerated in Bedlam in 1678, and wrote his book of verses there (and at Finsbury). He probably experienced madness; he certainly experienced the treatment of the insane meted out by the Bedlam regime.

In the poem above, we see some of the inhumanities which his poems complain of at large: being kept in the dark, with nothing to do (when Carkesse wanted to write his way out of confinement, by addressing versified complaints to former patrons and protectors), sleeping in straw, and naked: “Without either Shirt, or Cloaths, / I lodg’d my merry Mad Youth”, another poem has his doctor gloat.

His lady visitor seems to be on the cusp between visiting Bedlam for the old reason of idle amusement, and an age of sensibility, visiting to perform charity. She was probably one of Carkesse’s supporters, as her gifts met all his needs: writing materials, money, a shirt, and throwing him the apricots as a change of diet.

Other poems reveal more about the regime: the vermin (“In a place I did him stow, /
Where Rats and Mice do swarm”, a poem makes his doctor say). “I’m opprest with cold”, says another. He was chained up: “Iron locks my Leg fast”, and beaten if he resisted treatment.

The brief ODNB entry on Carkesse says that by the standards of the time, the doctor in charge, Thomas Allen, introduced a relatively thoughtful regime in Bedlam. Purgings and phlebotomy were the medical norms for just about all ailments, and the inmates were subjected to both. Carkesse says he resisted as best he could. In the poem written to be voiced by Thomas Allen, the doctor complains about his patient:

My Chirurgeon he fiercely withstood,
And he led him such a Dance;
That to let this same Gown-man Blood,
A Sword was more fit than a Lance.
I order’d his Keeper, at Large,
On occasion to ply him with Blows,
That what Jugular did not discharge,
The mad Blood might come out at his Nose.

I can imagine copious blood-letting might have kept the wretched inmates quiet. More specific as a treatment was Allen’s notion that an infantile diet might reduce his mad patients to a more docile condition:

His Diet was most of it Milk,
To reduce him again to a Child;
And Butter as soft as Silk,
To smooth the Fierce and the Wild.
My Potions he turn’d into Drenches,
For he freely would take ne’re a jot;
But by Thomas and the Wenches,
They were forced down his Throat.

The potions Carkesse threw down would have been purgatives and emetics.

Here’s another complete poem – it uses the conceits of a love poem to express gratitude to another lady visitor:

On the Ladies looking into his Cell.

When Doctor Mad-Quack me I’th’Dark had put,
And a close Prisoner in my Cloyster shut;
A Lady chanc’d peep in, whose Beauty bright
Enlarg’d the crannies, and let in new light:
Quack, I'm now pleas’d, without the Sun, confin’d
See how he Blushes, by my Star, out-shin’d.

Throughout his ‘Lucid Intervals’, Carkesse maintains that he has been thrown into Bedlam by the contrivance of his enemies:

Satan’s Agents, my false Friends, combine
A Minister to Silence and confine.
I’m forc’d (though Sober) Bedlam to inherit,
When they, who put me here, the Prison merit;
For they’re possest, not I, by th’Evil Spirit…

These enemies seem to include, interestingly, Samuel Pepys, who had caught Carkesse peculating at the Navy Office, and had him dismissed from office:


… Mr. Pepys, who hath my Rival been
For the Duk’es favour, more than years thirteen:
But I excluded, he High and Fortunate…

Elsewhere, he blames his wife: “me to be Tam’d, / My Shrewish Wife and her Relations send”.

His actual confinement seems to have been prompted by an outrage against the Dissenters. Carkesse fancied himself to be a parson. “I am a Minister of God’s holy Word”, says the poem he addressed to the King (the ODNB entry says there is no evidence to suggest that this was true), and to have a divine mission. The revealing poem title is ‘On his being Seiz’d on for a Madman, only for having endeavoured to reduce Dissenters unto the CHURCH.’

“Whether Carkesse was incarcerated for a specific offence is difficult to determine” says the ODNB. It may not be quite so obscure a matter as this makes it sound. One has to imagine that there was at the time a pretty broad tolerance for attacks upon dissenters, but he seems to have gone just too far. In a poem in which he imagines himself in self-defensive dialogue with his doctor, we learn that Carkesse went dressed as a parson to a ‘Conventicle’, where he seems to have torn his parson’s gown. He was probably doubly drunk on zeal and spirits. His poem tries to explain these circumstances away: “in a Conventicle, / Who Sober would wear a Gown?” The Dissenters seem to have locked him out, so Carkesse tried to break in: “Oh but, Parson, you break the Wall, / And Burglary you commit”. Carkesse does not think that these charges warrant defending:

“the way to Build up the Church,
Is to pull down the Chapel o’th’Devil.
Then throw the House out at Window,
And lay it flat with the Ground.”

In other poems Carkesse suggests that he had also strongly taken to the taint of madness about the ‘Popish Plot’: “Titus destroy’d Jerusalem; and Rome / Her self, from Titus, may expect her doom. / Grow, Titus Oates, and thriving in this Land, / A Promise of our future Triumph, stand.” Jesuits and the Dissenters both set him off.

At other moments in the ‘Lucid Intervals’, he tries to assert that the whole incident was a feigned enragement, a piece of devout acting: “Madness in Masquerade …A Mad-man I have Acted, as a Feat”. Perhaps this half admits that he was merely dressed as a parson, and tore up the robe on being challenged about his right to wear it. Carkesse makes allusions to plays like The Humorous Lieutenant and The Mad Lover, in which insanity is performed by the actor in the role, rather than a medical condition.

But the self-exposing ‘On his being Seiz’d on for a Madman, only for having endeavoured to reduce Dissenters unto the CHURCH’ indicates that Carkesse was taken straight off to the asylum after his attack on the ‘Conventicle’, looking very much like a dangerous maniac, but (from his point of view) on his dignity and determined to make it look as though he went without constraint:

as I did pass,
I arm’d my hands in Coach with broken Glass;
Threatning the Slaves, which waited on my wheel,
That if they touch’d me, they should find 'twas steel,
Th’affrighted multitude observe their distance,
Without their help I enter, or my resistance:
But the great Tumult, and such solemn state,
Amus’d the Officers of Bedlam-Gate:
So well I Acted, that they did not stick,
Me to receive as their Arch-Lunatic…

The old print DNB apparently said that Carkesse ended up as a Catholic. The current ODNB says this is not evidenced. But he was, to say the least, unstable, and may have ended up in one of the churches he had previously attacked. My image is of course one of Goya’s mad houses.