The Newcastle Witch-pricker, 1649, and other enormities 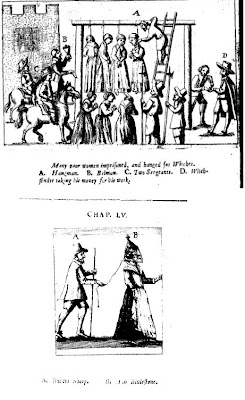 I got round to looking at the original source for the much-cited account of the authorities in Newcastle-upon-Tyne hiring a Scottish witch-pricker in 1649/1650. It’s in Ralph Gardiner’s Englands grievance discovered, in relation to the coal-trade (1655). Everything makes more sense in the context. Gardiner was very, very angry at the way the town was being run. His cogent objections to the imported witch-pricker appear alongside two other examples of arbitrary, cruel, and illegal local regulations: he follows the witch-finder with an account of a woman being paraded round the streets with an enhanced and augmentedly cruel scold’s bridle on her head, and another shame punishment, this one for drunkards, who had to go through the streets dressed in a barrel.

These tyrannies are just incidental illustrations of how bad things have got: Gardiner’s main quarrel concerns how the coal trade was fixed by the town authorities. Boats arriving to pick up coal were compelled to discharge their ballast (prior to loading coal) at Newcastle itself, and pay a tax on that discharge of ballast at 8 pence a ton. To get to pay this local imposition, ships had to make their way seven or eight miles up the Tyne, a river full of shifting sandbars, bends, and the ballast stones which those who profited by their local tax allowed nevertheless to slip back into the river, where it helped sink yet more ships. Gardiner wants all this reformed by Cromwell, to whom the book is addressed. North Shields, right at the mouth of the Tyne, should become a market town, he says, and the trade be run from there, without all this loss of shipping and lives as people struggle to comply with the local profiteers. (Just how hazardous the whole area was is perhaps captured in his assertion that if purchases of coal were permitted in North Shields, fewer people would run the hazard of falling down snow-concealed mine shafts on their way to Newcastle - when the Tyne is frozen, he means, and not open to river traffic.)

Anyway, here’s the witch-pricker about his appalling trade:

“John Wheeler of London, upon his Oath said, that in or about the years 1649. & 1650. being at Newcastle, heard that the Magistrates had sent two of their Sergeants, namely Thomas Soevel, and Cuthbert Nicholson into Scotland to agree with a Scotch-man, who pretended knowledge to find out Witches by pricking them with pins, to come to Newcastle where he should try such who should be brought to him, and to have twenty shillings a piece for all he could condemn as Witches, and free passage thither and back again.

When the Sergeants had brought the said Witchfinder on horse-back to Town; the Magistrates sent their Bell-man through the Town, ringing his Bell, and crying, All people that would bring in any complaint against any woman for a Witch, they should be sent for and tried by the person appointed.

Thirty women were brought into the Town-hall, and stripped, and then openly had pins thrust into their bodies, and most of them was found guilty, near twenty seven of them by him and set aside.

The said reputed Witch-finder acquainted Lieutenant Colonel Hobson that he knew women, whether they were Witches or no by their looks, and when the said person was searching of a personable, and good-like woman, the said Colonel replied and said, ‘Surely this woman is none, and need not be tried’, but the Scotch-man said she was, for the Town said she was, and therefore he would try her; and presently in sight of all the people laid her body naked to the Waist, with her clothes over her head, by which fright and shame, all her blood contracted into one part of her body, and then he ran a pin into her Thigh, and then suddenly let her coats fall, and then demanded whether she had nothing of his in her body but did not bleed, but she being amazed replied little, then he put his hand up her coats, and pulled out the pin and set her aside as a guilty person, and child of the Devil, and fell to try others whom he made guilty.

Lieutenant Colonel Hobson perceiving the alteration of the foresaid woman, by her blood settling in her right parts, caused that woman to be brought again, and her clothes pulled up to her Thigh, and required the Scot to run the pin into the same place, and then it gushed out of blood, and the said Scot cleared her, and said she was not a child of the Devil.

So soon as he had done, and received his wages, he went into Northumberland to try women there, where he got of some three pound a piece. But Henry Ogle Esq a late Member of Parliament laid hold on him, and required Bond of him to answer the Sessions, but he got away for Scotland, and it was conceived if he had staid he would have made most of the women in the North Witches, for money.

The names of the prisoners that were to be executed, being kept in prison till the Assizes, and then condemned by the Jury being Burgesses were, Matthew Bulmer, Eliz. Anderson, Jane Hunter, Mary Pots, Alice Hume, Elianor Rogerson, Margaret Muffet, Margaret Maddison, Eliz. Brown, Margaret Brown, Jane Copeland, Ann Watson, Elianor Henderson, Elizabeth Dobson, and Katherine Coultor. These poor souls never confessed any thing, but pleaded innocence; And one of them by name Margaret Brown beseeched God that some remarkable sign might be seen at the time of their execution, to evidence their innocency, and as soon as ever she was turned off the Ladder, her blood gushed out upon the people to admiration of the beholders.


John Wheeler, Elianor Lumsdel, and Bartholomew Hodshon, proves the like.

The said Witch-finder was laid hold on in Scotland, cast into prison, indicted, arraigned and condemned for such like villainy exercised in Scotland. And upon the Gallows he confessed he had been the death of above two hundred and twenty women in England and Scotland, for the gain of twenty shillings a piece, and beseeched forgiveness. And was executed.

The Judgement nor Execution is not in question, nor questioned, being ordinary; But only it being desired to know by what Law the Magistrates of Newcastle could send into another Nation for a mercenary person to try women for Witches, and a Bell-man to cry for them to be brought in, and twenty shillings a piece given him to condemn them?

Query, and by what Law men are hired to give evidence to take away peoples lives, and the convicted estates to come to the Jurors, being extraordinary?

The Lord Protector, commands all Judges, Justices and Witnesses to appear to execute Justice, and give evidence gratis.”

It looks as though the witch-pricker operated via shame and confusion. He exposes the woman’s upper body, apparently then surprises her and all onlookers by running his pin into her thigh, quickly letting her clothes fall so that no-one can tell whether he has actually done so or not. She does not know what has happened: she knows that she hasn’t been pricked, though it looks to everyone as though she had been. She is aggressively asked if she has the pin in her body without bleeding: she probably hasn’t felt anything, as nothing has happened, and she of course is not bleeding. In the simplest sleight-of-hand, the Scot then reaches up her skirts and produces the incriminating pin he has, of course kept in his hand. But here, prejudiced in her favour by her good looks, the Lieutenant-Colonel intervenes, and wants actually to see the operation performed. This time, of course, blood flows.

You will see that Gardiner doesn’t want to get side-tracked into a general argument about the justice of witchcraft charges: he evidently thinks these people were all innocent (he comes up with his own notion of why the good-looking woman failed to feel the pin and bleed) and rightly considers their persecutors to be driven by greed. Here he is on the woman forced round the town wearing the ‘branks’, and the drunkards similarly forced at rope’s end up and down the streets in the barrel:

“John Willis of Ipswich upon his Oath said, that he this Deponent was in Newcastle six months ago, and there he saw one Ann Biulestone drove through the streets by an Officer of the same Corporation, holding a rope in his hand, the other end fastened to an Engine called the Branks, which is like a Crown, it being of Iron, which was muzzled over the head and face, with a great gap or tongue of Iron forced into her mouth, which forced the blood out. And that is the punishment which the Magistrates do inflict upon chiding, and scolding women, and that he hath often seen the like done to others.

He this Deponent further affirms, that he hath seen men drove up and down the streets, with a great Tub or Barrel opened in the sides with a hole in one end, to put through their heads, and so cover their shoulders and bodies down to the small of their legs, and then close the same called the new fashioned Cloak, and so make them march to the view of all beholders; and this is their punishment for Drunkards, or the like.”

Gardiner observes: “These are such practices as are not granted by their Charter Law, and are repugnant to the known Laws of England.” There’s a revealing detail when he goes on to cite the relevant laws: he has a law passed to punish drunkards which he can cite, but though he was a great searcher through statute books, cannot cite a law that decreed the ducking of scolds:

“Drunkards are to pay a Fine of five shillings to the poor, to be paid within one week, or be set in the Stocks six hours, for the second offence, to be bound to the Good Behaviour, 1 K. James 9. 21. 7.

Scoulds are to be Duckt over head and ears into the water in a Ducking-stool.”

My illustrations are from Gardiner’s book (two separate images combined into one).