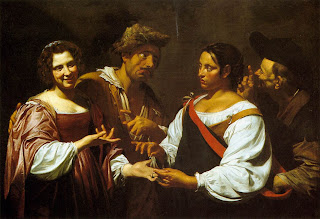 I am always interested in the stray lives that occasionally get mentioned in 17th century texts, people otherwise unrecorded, making their way through life as best they could.

My image is of a fortune teller by Simon Vouet. The number of early modern paintings of fortune tellers reminds us just how common a vocation this harmless activity must have been.

In the anecdote below, George Carleton, in his Astrologomania: the madnesse of astrologers (1624) drops that perpetual 17th century mode of ‘my opponent says this, but the Bible says…’ to produce a reminiscence from his childhood in Carlisle:

(yes, it is part of one of those arguments – a colleague points out that Milton once reaches a resounding ‘and ninthly’)


… that those Predictions do not always fall out jump and true, as they would bear us in hand; but that either the Divell doth miss sometimes, or that his instrument doeth mistake his informations. This I am able to justify and make good by a plain story of my self when I was a child, & went to School at Carleill where I was borne. There came an odd Fellow about the Country: He was reputed a Cunning man, and so called, for that he took upon him to tell Fortunes. The Fellow was dumb, or at least feigned himself speechless, but certain it was, he had an instinct or Familiarity with some Spirit. This Fellow being on a time in my Fathers House, there were some there more simply honest then Religiously wise, made signs unto him, to show what should be my Fortune, and another School-fellows of mine that was then present. Whereupon, this Wizard having looked earnestly upon us both, and paused a little; for my School-fellow, he takes me a low stool, and gets up upon it, with a Book in his hand, and began to act after his fashion, signifying thereby that he should be a Preacher: and for me, he took a Penne and a scroll of Paper, and made as though he would write, signifying thereby, that I should bee a Scrivener. Now it so fell out, that my School-fellow proved the Scrivener, and I prove the Preacher. By which it is plain to bee seen, that either the Divell himself did miss, or his instrument was mistaken in his informations.”

So, here’s a chap who may or may not be dumb: Carleton can see that dumbness might be part of the act, certainly the charades by which the fortune teller acted out his diagnoses would have added a lot to the entertainment value of his little act, and dumbness gives him a mystique that relates him to the more normal line of blind prophets. A fortune teller who cannot speak, that's quite clever, it intrigues your client.


However, although Carleton has some perception of the flummery involved in the divination, he retains a belief in it as supernatural: indeed, it is diabolical in its inspiration. “Certain it was, he had an instinct or Familiarity with some Spirit”, he says solemnly. The predictions for the two boys were both diabolically prescient, and diabolically wrong, for the devil will always tell lies – the right vocations, but each assigned to the wrong child.
Carleton cannot see a bit of harmless fun, cannot see a man surmounting a possible disability and making a living. This is a moment when the devil reached out and nearly touched his life, it has stayed with him ever since. He could not have told the story, of course, had the prediction been exact.


From Astrologomania: the madnesse of astrologers. Or An examination of Sir Christopher Heydons booke, intituled A defence of iudiciarie astrologie. Written neere vpon twenty yeares ago, by G.C. And by permission of the author set forth for the vse of such as might happily be misled by the Knights booke. Published by T.V. B. of D.

A fortune teller/astrologer features in my new novel, though by the time of the restoration astrologers had fallen out of favour somewhat. A great post - I love to hear the actual words, lots here for me to get my pen around.

William Lilly made a big comeback when one of his prophetic images was construed as his prophecy of the Great Fire of London. But the Royal Society wouldn't let astrologers join or affiliate, and all John Gadbury's efforts to gather life stories (with the aim of correlating them with birth charts, to show astrology really did function) came to nothing. Yours is a difficult task, to re-imagine their way of speaking and writing. But if you keep it full of the Bible, that will be pretty close to the mark! Good luck with that.