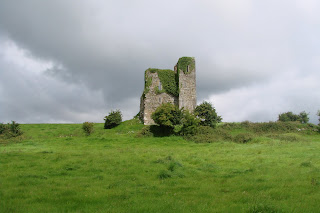 Kilcolman Castle, which I was pleased to be able to revisit a few days ago, having misplaced the photographs I took on a visit two or three decades ago. It’s not an easy place to get to see: a colleague tells me that the landowner detests all mention of Spenser, and is reputed to remove any signs directing the curious. I hiked across a couple of fields covered in long wet grass, was shocked three times on electric fences, climbed over lots of barbed wire, and discovered on my way back that the herd of cows I had seen grazing were large and rather too curious young bulls, who had me backing out of their field, and smartly back over the electric fence that I’d first thought of as surely too rusty to be electrified…
But it’s an evocative place for the Spenserian. He is not supposed to have lived in the keep of the old FitzGeraldine castle, but it must have been very familiar to him, and some of the masonry looks post-medieval. The tower stands slightly off the crest of a low, grassed-over limestone outcrop. The only other piece of substantial early masonry is a ruined turret quite a surprising distance away, which indicates that Kilcolman, once described as “a large castle, old, and dilapidated, which at the present time has no use except to shelter cattle at night’, once would really have been so. Perhaps it had a palisade rather than a curtain wall.


I do not know if any archaeology has been done here. Maybe some 19th century gentlemen poked around. The outcrop has suggestions of former buildings all over. To the south, Spenser had his own bog, now a nature reserve, which among the lines wishing away all the bad things from the wedding night in ‘Epithalamion’, especially brings alive: “Ne let th’unpleasant Quyre of Frogs still croking / Make us to wish theyr choking.”
At the north west of the outcrop, there’s another feature of Spenser’s imagination, a cave running back into the hill. It could only be through here that, on the 15th October 1598, when Kilcolman was attacked “Spenser and his family escaped through an underground tunnel, known as the fox hole, leading to caves north of the estate (the tunnel is still recorded as extant in 1840)”, as the ODNB rather vaguely puts it. There must have been a sousterrain from the old keep. I fondly imagine that somewhere in this lost tunnel Spenser left a small iron chest containing, say ‘The Legend of Sir Peridure, Of Constancy’ – the rest of Book VII. He certainly had time to work on extra portions of his great poem, though not very much after James fitz Thomas Fitzgerald, ‘the súgán earl of Desmond’ began his 1598 rebellion.
Earlier in our week in Ireland, I had found my way to Smerwick, and the desolate remains of the Fort d’Oro, where Spenser was probably present when Arthur, Lord Grey de Wilton ordered the massacre of the surrendered garrison (9th November 1580). The local musuem says that the fort was named because scattered along the foreshore were lumps of Canadian stone, glittering with pyrites, brought back as gold by Martin Frobisher's expedition for the North-West passage.
If Spenser himself wasn’t a man of blood, most of his superiors and associates were, and he defended and advocated brutality. Kilcolman seems to have been very much targeted by the rebels in 1598: Spenser had quite clearly been an aggressive land-grabber, and the native Irish had reason to remember who it was that Spenser had served (and tried to remake into ‘Arthegal’).
‘The iron hand and the velvet glove:
Come live with me and be my love.’

Just now saw your blog on kilcolman Castle. It has been archaeologically excavated (in part) by Dr Eric Klingelhofer of Mercer University, Georgia USA. He has published in the Journal of the Cork Historical and Archaeological Society, Ireland. See also his recently published 'Castles and Colonists'. The landowner at Kilcolman was always very supportive of the excavations and very helpful. Eamonn

Thanks, Eamonn, so he has. I noticed that three seasons of work produced (on the artefacts front) two bent pins and a bone lute-string tightener. Which may be a vulgar view of archaeology, but it wasn't exactly the whole of Book VII of the Faerie Queene: 'The legend of Peridure, or Constancy', in a nice watertight box. Interesting to see two big treasure hunter pits in the ground plan: maybe they have it. I was reporting hearsay about the landowner, but from my own experience too - it's very hairy getting there as a private individual. I didn't know about that book by Dr Klingelhofer, which sounds interesting. Richard Berleth is my Virgil in relation to the particular circle of the inferno where Spenser the colonist can be found.
RB

I also just now saw your blog on Kilcolman. Its nice to see a man who knows his Faerie Queene. In Andrew Hadfield's biography of Spenser(2012) he states that the cave emerges in a quarry (where he presumes that Spenser and his family escaped through)and he implies that the route is still accessible - did you try it?

I live reasonably near and I really must visit.

Dear John, Good luck with the hike across the pastures to get there. As I indicate in my post, the landowner does not make visiting easy, and electricity runs through fencing wires without indication. Have some thick rubber gloves with you -do you know how you can test if a fence is electrified by holding a blade of grass against a suspect wire? Gives you a jolt, but not too bad. I know that there reckons to be a souterrain from the keep to the cave I pictured, which Hadfield seems to call a quarry (plausible enough, but I don't recall it looking as though more than informal acquisition of stones had gone on there). I didn't try to get very far in: wet stones, sheep poo, rapid narrowing of the entrance all come to mind. If you Google 'Kilcolman Castle Archaeology' you can find out more, though Klingelhofer's report now seems to be behind a pay wall. I was recently looking at George Carew's pictorial map of Cork in Spenser's time (just after), makes you see just how embattled they were.
Best wishes, Roy