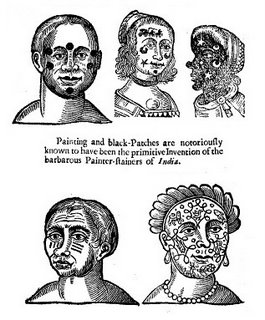 ‘These are the ears which have hearkned to so many base, scurrilous, profane, lust provoking songs’.

A stray comment on my blog repeated the quite frequently made point that it would be interesting to have women’s replies to certain notorious poems by Donne. I was still reflecting on the impossibility of any woman writer in the early 17th century sparring with Donne on his Ovidian home turf (it took Aphra Behn to come along and expose in female-authored Ovidian poetry sexual inadequacies in the male) when I came across William Tipping addressing young women in 1647. He is imagining how the general run of young women will feel on the day of judgment, having listened to sinful poetry and music. And as for their eyes, these women will on that last day say to themselves, ‘These are the eyes which shot forth so many envious, amorous, lascivious glaunces’. All the senses they abused will present to them at the Day of Judgement, Tipping affirms, knowledge of the ‘everlasting woe and sorrow’ they face. It all goes together: poetry provokes lust, and hell beckons for the young woman who listens to it.

Tipping, a Puritan, has been describing, in contrast, an exemplary life and death, that of Apollina Hall, a young widow, who died at the age of just 21. (The Remarkable life and death of the Lady Apollina Hall Widdow, deceased in the 21st year of her age, 1647). Mis-educated by her evidently non-Puritan Grandmother, Apollina lacked proper religious fervour till she was 18. She cannot have had much to repent of, but at that age, repent she did (acknowledging your sins was the required Puritan formula), and she fell into habits of the strictest Protestant observance, writing up her spiritual balance sheet at the end of every day. I think I have seen cited before somewhere her particular triumph of austerity and emotional self-denial, as faithfully recorded by Tipping:

‘She was exceeding solicitous and fearfull over her self, least any created comforts (the Danaes of corrupt men) should creep into, and take possession of her heart, as appeared by this; that being moved by a certain person about her, to send for her childe, in which she was much delighted; she durst not, she answered, trust her deceitfull heart, lest it should be immoderately let out upon her childe, as formerly it had been upon her dear husband.’

In her mortal illness, she fell into what Tipping can stretch to oxymoron to term ‘holy repining’ at the medical fees she has had to pay, the money being merely ‘cost and charge … upon a rotten carcass (that was her own expression)’ - even Tipping blenches a little at this, and has to make it clear in his parenthesis that he is just reporting her words. The money she has spent on herself, she said, ‘might have comforted many a poor christian’.

She duly died with a number of appropriate utterances, which Tipping has to record: ‘finding death to approach; this is the joyfullest day (saith she) that ever mine eyes beheld.’ She comes through a bout of ‘extream convulsions’, and of course regrets survival: ‘I had I thought I should have been with my Saviour before this time’ she says.

‘My joyes are unspeakable’, she says, as death comes close. ‘In this her last and extream struggling with death, she often cried out, Come Lord, come Lord, when Lord, how long Lord’.

Not all of this is to our taste, of course: refusing to indulge your carnal nature by seeing your own child makes the Puritan lady set on meeting her saviour look entirely self-focussed; her faith has circumscribed her emotional life. Yet for a very young woman to die with such acceptance is impressive in its own way.

After this painful account, Tipping then turns to admonish other young women, who are in the main racketing along the way to hell-fire and damnation. As usual with a seventeenth century man, the effort of praising one individual woman will be compensated for by an eloquent attack on women in general. Suddenly, he sounds like Tertullian, and his particular bugbear happens to be face patches:

‘Away with your base and lustfull baits, those black and infamous patches in your faces, which render you odious and scandalous in the world, and in every wise mans eye disfigure you’. He offers the piously sarcastic thought: ‘Should the Lord in the naturall composure of their faces, have ingraven such black spots in them, as now their fancies adde, surely they would have looked on themselves as monsters.’ I doubt whether any woman could have replied that if the Lord had thought fit to engrave her face with the pits left by smallpox, and she reserved the right to make the best of things.

He indignantly adds that ‘ the very Indians (amongst whom the Lord hath lately vouchsafed some dawning of the Gospel) do so abhor the naked brests of women, and hair hanging loose, or cut as mens hair is, that they have made some Laws against them. Oh that our English Ladies should grow so bold, as to practice that which Indians abhor, which miserable heathens count their shame.’

In part, the author can be excused by historical circumstance: he regularly refers to the recent civil war, and clearly feels that everyone should be as self-mortifying as poor Apollina Hall had been.

As with earlier Protestants like Phillip Stubbes, the denunciation tends to betray his horrified fascination, an obsessiveness. Look at that expression about ‘created comforts’: ‘the Danaes of corrupt men’. The classical allusion shouldn’t really be there, and it doesn’t fit his argument. Danae was seduced by gold, rather than being a seducer. But Tipping is so very over alert to female allurement. By the end of his account, he is thundering damnation, but he does at least imagine and formulate a reply, making the girls in their wicked face patches sound like one of the more jaunty passages of the Bible:

'Now if any of this sex to whom I direct this discourse shall reply and say, I will walk in the wayes of my heart, and light of my eyes; I will rejoice in my youth, and my heart shall clear me in my youth: I will say no more but this; Thou that art filthy, be thou filthy still; thou that art profane, be profane still … but take the close, hear thy doom, know thou assuredly, that for all these things God will bring thee to judgement.’

The rather charming assemblage of lore republished on the web at

asserts that the earliest mention of face patches is in ‘Bulwer’s Artificial Changeling’, of 1653.

This reference is to the splendidly titled Anthropometamorphosis, man transform'd, or, The artificial changeling historically presented in the mad and cruel gallantry, foolish bravery, ridiculous beauty, filthy finenesse, and loathsome lovelinesse of most nations, fashioning & altering their bodies from the mould intended by nature : with a vindication of the regular beauty and honesty of nature and an appendix of the pedigree of the English gallant / by J.B.

This was John Bulwer’s suitably demented account of the way humankind has decorated (or mutilated) bodies (“the eye-browes abused contary to nature”, etc), and from that source I take his image of face decorations. It is interesting that, like the Puritan Tipping, Bulwer uses native cultures as a form of perspective on his own, though Tipping makes his native people into moralists, Bulwer merely has them as equally mad.

But as for the mention of face patches, the Puritan beats the ethnographer-satirist by a matter of some years, Puritans being such devout followers of fashion.

gives a picture of a surviving contemporary box used to keep your face patches in (the Pitts Rivers Museum, Oxford).

What a wonderful blog you have here! It’s very quirky. You write lucidly, and a little wryly too, and it makes a charming read. Phoenix.

Actually, it's not so far-fetched to imagine Donne's female contemporaries replying to his poems. Lucy Russell, Countess of Bedford, wrote a poetical reply to Donne beginning 'Death be not proud, thy hand gave not this blow'. And there's a letter from Donne to Lucy Russell in which he asks her to send him copies of other poems, remarking that 'they must needs be an excellent exercise of your wit, which speak so well of so ill'. Davidson and Stevenson, in their excellent anthology Early Modern Women Poets, suggest that these poems may have been 'improper or satiric', as Donne promises the Countess that he 'will not show them, and will not believe them'. So maybe her lost response to Donne's 'To his Mistress' will turn up, one day, in a forgotten commonplace book in a dusty corner of an obscure country house library. (Not really very likely, I know; but one can always daydream ..)

It doesn't matter for I shall whip out my pen and notebook and start scribbling a reply to one of Donne's poems...

How simple that sounds, if only I had some talent at writing poetry.

Hello i was just wondering if there was anyway you could tell me where you found the quote 'that our English Ladies should grow so bold, as to practice that which Indians abhor’ from The Remarkable life and death of the Lady Apollina Hall Widdow, deceased in the 21st year of her age, 1647)because i would like to cite it in an essay but im not supposed to be using the internet?!
Thanks, Sam x

Hello i was just wondering if there was anyway you could tell me where you found the quote 'that our English Ladies should grow so bold, as to practice that which Indians abhor’ from The Remarkable life and death of the Lady Apollina Hall Widdow, deceased in the 21st year of her age, 1647)because i would like to cite it in an essay but im not supposed to be using the internet?!
Thanks, Sam x

Dear Sam,I will put this here in case you don't get it as an e-mail: You probably have a bit of a problem. “O that our English Ladies should grow so bold, as to practice that which Indians abhor” comes on page 22 of William Tipping’s book The remarkable life & death of the Lady Apollina Hall widdow, deceased in the 21th year of her age (1647). The copy I accessed was on something called ‘Early English Books Online’, a database which is accessible if your University subscribes to it. There’s a copy of the actual book in the Bodleian Library, Oxford, there are probably a few more exemplars in research libraries across the world. I can’t think that the 1647 text has been reprinted in any modern collection, for I can’t get any hits on the MLA bibliographical database for either author or title. So, if you cite this one, it is going to look very much like what it is, a quotation from the internet. Can you think of any other way I can help you? I can’t come up with a work-around on this.
Dr Roy